The ATO has a little known but very helpful scheme in place to assist importers with their cash flow.  The scheme is called Deferred GST.  This allows freight forwarders to waive the GST cost of imported goods when they land in Australia.  The client is charged the GST by the ATO on a monthly basis when the Business Activity Statement is issued.

In order to be eligible to participate in the Deferred GST system, the client must agree to lodging the BAS on a monthly basis.

When you become enrolled in the Deferred GST system, your freight forwarder is notified.  As a result, the invoice you receive from your freight importer will NOT include any GST for landed goods.

How does this impact the preparation and lodgement of the BAS?

When the BAS is issued by the ATO, if any GST has been charged to the client during the month it will show up in box 7A. 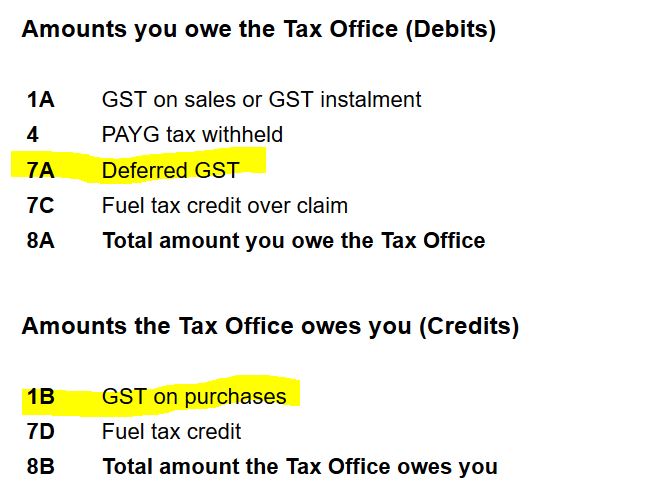 Let’s work through an example:

BlueSky imports product from China.  During the month of October 2016 BlueSky imported goods to Australia with a landed value of $400,000.  The freight forwarder invoiced BlueSky for the freight charges, import duty and other fees, but the $40,000 GST that is normally payable on the import was deferred.

In November, BlueSky completed and lodged the October BAS.  When the BAS was printed out, box 7A was pre-populated with the $40,000 GST on imports.  BlueSky collected $34,000 in GST during the period and paid $5,500 in GST.

The October BAS will be lodged as follows:

Amount You Owe the Tax Office

Amounts the Tax Office owes You

Just last month we acquired a new client who had not included the GST charged via the Deferred GST scheme to the GST paid.  They were owed over $60,000 in GST paid on imports over the last few years.